Many of the conversations that launched our collaboration as a Center have revolved around the question of self-perception in contemporary networks. The question of “what do I look like to others” or “who am I to others” occupies undoubtedly a large part of our lives online, to the consternation of many who see such preoccupations as a distraction at best, or worse – a regression.1

But such concerns are central to our being as physical, social animals. Confident movement through our brick-and-mortar cities relies on a sense of self-understanding as more or less visible, more or less out of place. We could say the same about our lives as employees, students, voters, fans. Sociology, Anthropology, and Art are rich with explorations of this, showing us how much our movement through the world depends on being able to image oneself in others’ eyes. To balk at this notion, to claim ignorance of one’s public image, is also to participate in this process, as only those who can “pass” as a member of the dominant group in a space can claim ignorance of their public faces. 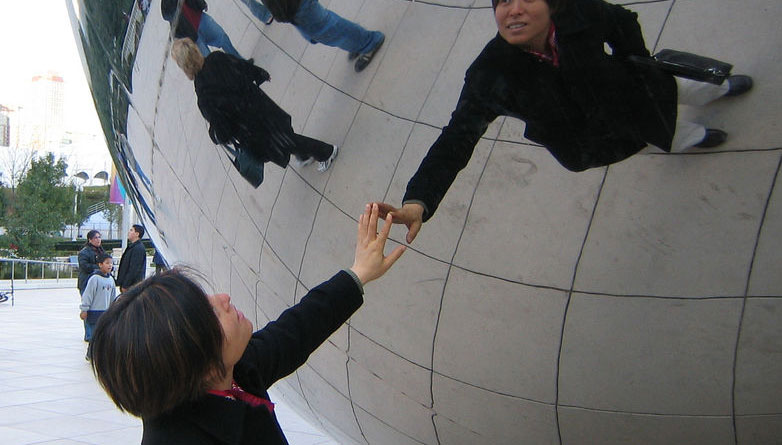 We look in the mirror before heading out of the house – we construct our clothes, we posture and consume to adopt stances – and this is no realm of superficiality, but rather how we place ourselves in patterns of behavior that stick and form habits, modes of citizenship.

There are many mirrors in this process, both qualitative and quantitative. Encounters with the government (census, taxes, law enforcement) reveal one thing, and with marketing (junk mail, advertising) another. Some actively pursue more such information, others avoid it. Sometimes how we look to others is an acceptably public matter, and other times we feel that a glance in the mirror should be a private event. And when our public image is predictable, it can be uncomfortable. The line between public and private grows more difficult to discern – I might be comfortable with people knowing where I shopped and even what I bought, but not if that also reasonably predicts how I might vote.

There is much work to be done in establishing just policies around which aspects of one’s public image should be visible, and to whom. Basic to this pursuit is our ability to even see ourselves – and that’s no easy matter in many cases.

That’s where our Center comes in. What do I look like to the providers of infrastructures on which I depend every day? My city has one image of me through the property tax bill, and my government has another image of me through my income tax forms. I remain fairly confident that my library has no image of me, as we’ve agreed that they won’t keep records of what I check out. But what image does my power company have of me? Or my water company, my video streaming service, my internet search engine?

“Who cares?” some may ask. And indeed, my motivations for understanding self-image in these cases may be different than those in my choices of dress, or how I reveal my taste preferences in a social-networking site. The stakes are different, and maybe even not apparent to all. But though our cable television provider or our home mortgage lender may look quite different than the proverbial privacy-invading reporter, peeking over the fence to intrude on a domestic event, their motivations for obtaining special knowledge persist. The more our providers know about us, the more they can alter their services – in their interest or ours. And of course, our history of use for one provider may have financial value to another.

The mere fact of our actions’ availability in this way is not sinister, and probably not even new. As much potential lies here for positive and even progressive action as for exploitation (though the record of the latter is unfortunately longer).

What may be new here, however, is that (1) increased sensing capabilities record our actions in unprecedented detail, (2) advanced algorithms can learn from this data and predict our actions, and (3) we know less than ever about these databases. Our records as consumers within our most basic infrastructural systems are increasingly inaccessible – in part due to their technical complexity, but also because ownership of these records is in debate.

Our efforts as a center largely revolve these new phenomena, their challenges and opportunities. We want to help people see how their infrastructures see them, both to equip them in the pursuit of privacy and to empower them in efforts to collectively create more efficient, just, and responsible systems. There lies tremendous potential in the new data for addressing problems that previously seemed too complex to solve. But we can only address these problems if users and consumers feel safe, empowered, and knowledgeable about their paths and ripples, the ways their wakes enmesh with others.

In future posts, we’ll offer some accounts of our initial efforts, and some surveys of peers at work on related concerns.

1. For an interesting take on those who “refuse” social media, see Nathan Jurgenson’s post at Cyborgology